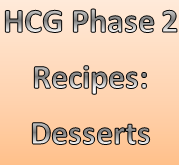 Core apple and remove seeds. Crush Melba toasts. Mix Melba crumbs with powdered stevia, cinnamon to make crust. Add water to half the crust mix, moisten and press crust into baking dish. Cut apple into thin slices and toss together with stevia and cinnamon with 2 T. water. Place apples into dish and cover with the remaining DRY crust mix. Bake 450 for 15 minutes.

Take a knife around the inside peel of the grapefruit so that it cuts out the grapefruit from the peel. Separate the sections and place in a bowl. Sprinkle with Stevia and Cinnamon. Toss, then place back into grapefruit peel. Broil for about 3-5 minutes until caramelized.