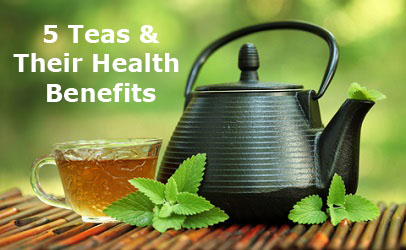 You put that can of Diet Coke down right this instant. Don't you know that crap is eating your insides? "But water is so boooring," you whine, "and I need an extra kick in the pants every now and then." Granted, water doesn't have much taste (unless you're on Naked and Afraid,) and it doesn't have any caffeine to kick up your mental stimulation, but there's a fix for that. It's called tea (pronounced TEE), and once you develop a taste for it, you'll want an icy cold glass of it in front of you all summer and a steaming hot mug of it on hand all winter. It's got flavor, and it's got caffeine. It soothes, relaxes, and hydrates, and it can help improve your health. What more could you want in a beverage?

But tea isn't good for you just because the alternatives stink even worse, oh, no. Tea is really, really good for you because it's densely packed with phytochemicals, which are compounds found in every plant on earth that help protect them from disease. Phytochemicals found in tea include polyphenols and carotenoids, which are both potent types of antioxidants. The protective features of these compounds are transferred to those who consume the plant, meaning you.

Different types of tea offer different health benefits, but they're all tasty, and they're all good for what ails you. So, do your body a favor. For the next seven days, try drinking nothing but water and an endless glass (or mug) of one of these ultra-healthy teas, and just see how much better you feel. Chances are, you'll never go back to soda.

The health benefits of green tea have been widely studied. Its powerful antioxidants – including the almighty EGCG – may prevent the growth of certain cancers, keep the arteries free of clogs, reduce the risk of dementia like Alzheimer's and Parkinson's disease, lower cholesterol, and reduce your risk of stroke. A recent study found that every cup of green tea you drink each day may lower your risk of cardiovascular disease by a whopping 10 percent.

Some of the antioxidants in green tea improve your body's ability to burn fat, which translates to improvements in muscle endurance during your workout. A daily dose of green tea may also relieve seasonal allergies and improve the health of the brain regions that regulate memory and learning, and it's been found to help kill cancer cells – particularly those in the pancreas and mouth – by destroying those cells' mitochondria.

Each cup of green tea has 25 milligrams of caffeine (a cup of coffee has between 50 and 100,) and sipping on it throughout the day can give your brain the boost it needs to stay focused without giving your body the caffeine jitters.

Black tea has the most caffeine of all teas, at 40 milligrams per cup, and it has fewer antioxidants than green tea due to the way it's processed. But that doesn't mean there's not a mini health bomb in every cup.

According to recent research, black tea may protect the lungs against damage due to smoking (but that doesn't mean you should keep smoking!), and other studies show that it, like its green cousin, may reduce the risk of stroke by 21 percent if you drink three or more cups each day.

Women who drink black tea regularly are at a lower risk of developing clogged arteries, and anyone who drinks it may see a reduced risk of suffering a heart attack. Black tea may also lower your risk of developing diabetes, kidney stones, high cholesterol, and Parkinson's disease.

White tea has the same kinds of antioxidants found in green tea, but there are even more of them! If green tea's grassy aftertaste makes you think of grazing cows, white tea may be your preferred poison, since it's a little milder. However, you'll need to consume a lot more to get a caffeine buzz, since white tea has just 15 milligrams per cup.

But drinking more white tea is a good thing! Along with the same benefits offered by green tea, white tea may improve glucose tolerance, and recent research at Pace University found that white tea extract can kill viruses, bacteria, and fungi in your body – particularly those that cause Streptococcus and Staphylococcus infections and pneumonia.

White tea can help lower LDL (bad) cholesterol, and a new study at Oregon State University found that it also protects against colon cancer in mice who are genetically predisposed to it.

Oolong tea tastes similar to, but a little richer than, black tea, and it's got 30 milligrams of caffeine per cup.

Oolong tea has been found to activate an enzyme that can dissolve triglycerides, that harmful dietary fat that holes up in your fat cells, and several small studies show that women who drink oolong tea burn more calories in a day than those who drink plain old water.

Another study found that people who drank six cups of oolong every day for two months lowered their blood sugar levels by 20 percent.

Green, white, black, and oolong teas are actually tea, while herbal tea is an infusion of plant parts like seeds, roots, leaves, or bark. The nutrients of whatever plant is used for the herbal concoction are transferred to the body in a form that's easily digestible and wholly delicious. Herbal teas have no caffeine, and you have an abundance of flavors to choose from. Some of the most commonly used herbal teas include:

Ginger tea is a common go-to for preventing motion sickness and boosting the immune system.

Rosehip tea is an ultra-rich source of vitamin C. It soothes your mind and body when you've got a nasty cold or flu, and it's great for boosting your immunity to help prevent those illnesses in the first place.

Chamomile tea helps relieve menstrual cramps and nausea and may help you sleep.

What’s your favorite kind of tea?